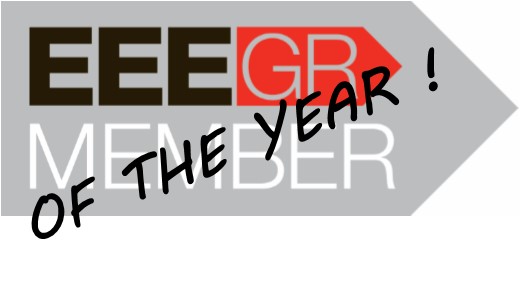 Ever since we first established premises in Great Yarmouth back in 2012 we have been enthusiastic members of EEEGR (The East of England Energy Group). I guess it’s one of those things where the saying “the more you put in, the more you get out” is very definitely the case and our resultant enthusiasm for and interaction with the organisation is quite simply because we think it has been good for us.

If you want to learn then learn from the best. In this case John Best. At EEEGR’s 13th Annual Awards event held earlier this month John, who founded and drove the organisation until 2012, was honoured by EEEGR’s members and presented with a Lifetime Achievement Award for his tireless work on behalf of the organisation. John was and is the consummate networker, knowing and putting together people for the benefit of the region and its industry and one little such piece of putting people together resulted in our setting up in Great Yarmouth 4 years ago, at least 12 months ahead of a rather more conservative timescale I had in mind had it not been for John’s enthusiasm and assistance.

John’s Lifetime Achievement Award was richly merited and if rather less merited, Gee-Force Hydraulics was named by EEEGR, to our complete surprise, as its Member of the Year 2016. We certainly do make active use of our membership, attending and supporting EEEGR events and activities because it’s been good for our business.

Networking is about knowing people and through our membership of EEEGR, and particularly following the example and enthusiasm of John Best, we have gotten to know people in the East of England energy market place far more quickly than would otherwise have been the case and as we look to use our Great Yarmouth facility to expand our client base and area of operations down towards London and the wider South East, you can bet that we won’t be winding down our involvement with EEEGR any time soon!