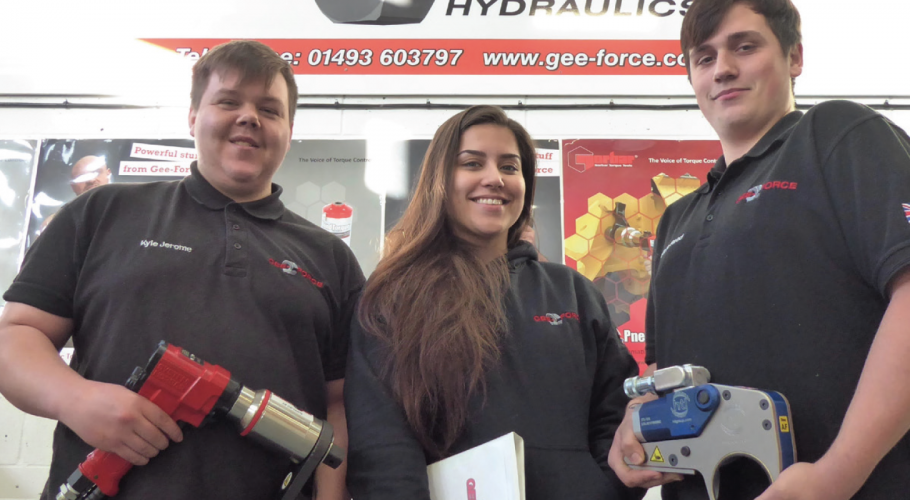 A growing specialist tool company is putting its faith in local young talent as it expands its staff.

Gee-Force Hydraulics hires and sells bolting equipment mainly to the offshore energy industry through its Great Yarmouth base. It was just a husband and wife venture run by Graeme and Jane Cook when it set up in Norfolk six years ago – but has now got nine staff following its latest recruits. Mr Cook said:

“We love the enthusiasm, energy and thirst for knowledge of young people, who add to the family feel of our team. Gee-Force’s new young staff members Kyle Jerome, Nas Sellars and George Read. In turn we provide them with the chance to better themselves through growing their careers and prospects. A lot of our business is done in the Great Yarmouth area and we know that local companies like doing business with local people.”

Twenty-year-old Kyle Jerome is now a workshop engineer, having initially got a taste of Gee-Force through school work experience when he was 15. He now helps maintain, service, repair and calibrate a wide range of tools. George Read, 16, is a trainee workshop engineer, combining part-time work with studies and gaining a welding qualification, as well as using his skills to help his dad renovate a classic Morris 1000 Traveller car.

Newest recruit is Nasya “Nas” Sellars, 18. She is now an administrative assistant at Gee-Force having previously visited there while leading a group of students around when working for a nearby engineering training company. Her role includes dealing with office paperwork including contracts. All of them, who live in the Great Yarmouth area, praised the supportive and friendly, family atmosphere of Gee-Force, whose base is at Beacon Park.

The company is partnered with HTL, the industry leader of controlled bolting, flange working and portable machine solutions. Gee-Force specialises in supplying hydraulic bolting torque wrenches as well as pneumatic and electronic tools for clients mainly in the energy and construction sectors. Mr Cook said Gee-Force was also exploring other market sectors as it continued to grow and was keen to invest in young people as it moved forward.