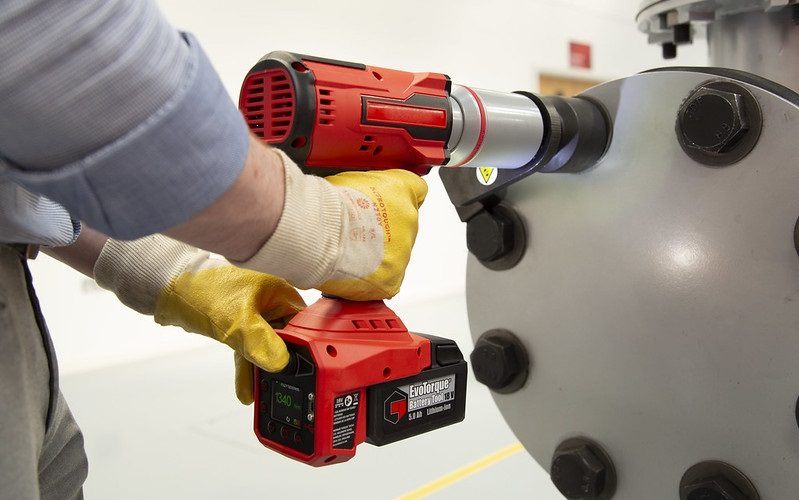 Earlier this week, UK manufacturer Norbar Torque Tools launched its much anticipated EvoTorque Battery Tool and we think it’s got game changer written all over. That is not to say that hydraulic, pneumatic and electronic tools will suddenly be rendered redundant but there will be many thousands of bolting applications that suddenly become logistically much easier to complete simply due to there now being no need to connect the tool up to a power source. Many working-at-height bolting applications in particular will be transformed in terms of simplicity and safety.

Battery wrenches aren’t in themselves new but until recently they have mostly consisted of consumer power tool handles with modified software and a gearbox fitted, resulting in overheating motors, broken handles, mis-tightened bolts  and frustrated cusomers.

Norbar’s new low-maintenance motor, tested over hundreds of thousands of tightening cycles, is amongst the most powerful fitted to a cordless torque tool. This gives a benefit not only in speed but in thermal durability which means that the new wrench will keep working when most competitors have overheated. Norbar’s new tool is also transducer controlled rather than current controlled.

Coupled with unique joint sensing software, this makes the wrench one of the most accurate torque tools available over a wide range of joint types and the transducer design protects against a common problem where dropping the tool can cause a permanent reading offset add in the new tool’s data capture capability which allows both tightening and bolt audit data, up to 3,000 time and date-stamped readings, with subsequent output either by USB cable or Bluetooth® 4.0. and that all adds up to an impressive lot of capability and reliability. The two 18V, 5.0Ah batteries and efficient motor give outstanding fastening performance per charge.

The new Norbar EvoTorque Battery tool is available from Gee-Force in single-speed and automatic two-speed models up to 4,000 Nm.